The main aims of this study are to describe how much the economic role of agriculture decreased, and this decrease comes mainly from some economic difficulties, for example weak income position of producers based on weak capital accumulation. So agricultural producers need financial supports to improve their production and favourable credit conditions. In 1990s during the last decade, the role of agriculture in the national economy decreased, which contributed to its decreasing share in GDP and real value of agricultural GDP. In 2001, in spite of the fact that the plant production considerably increased and the animal husbandry stagnated, the whole agricultural production volume was by 20 percent under its level of 1989. Finally by the end of 2001, the share of agriculture declined to 4 percent of GDP and together with food industry, their share was about 7 percent. The agricultural scissors increased considerably, namely from 126.5 percent in 1992 to 138.4 percent in 2001.The income conditions made a significant influence on the capacity of the agricultural sector in fields of investments and accumulation. The main problem was the decline of real value of investments. For example the real value of investments in 2001 had not implemented half of investments realised in 1989. This situation showed the low level of technological and technical development in the agricultural sector during a longer period, than a decade. It was important to increase different kinds of supports for agricultural producers, for example: export subsidies, interests of credits, supports for establishing new farmland structure. The share of supports for agricultural production and food industry was 12–14 percent of the two sectors’ GDP in 1990s. The development of the main factors of agricultural incomes was determined by index calculations based on the data of the APEH (Hungarian Tax and Financial Supervising Office) and EAA (Economic Accounts for Agriculture). The supports are needed, which are as follows: based on the APEH data, the profit before tax of 23 billion HUF in 1997 decreased to the loss-level of 8 billion HUF by the end of 1990s. The main aim for agricultural producers was to increase their capital accumulation to implement improvement of production in order to be competitive on the world and domestic markets. There is a difficulty that at the end of 1990s, only about 30 percent of the supports was directly provided for agricultural producers. In Hungary, without taxes and other different deprivals, the current value of production supports was over the level of incomes obtained in agricultural sector, but according to the calculation methods of the OECD, the value of PSE (PSE= Producer Support Estimate) index was at a very low level and it had a decreasing tendency, which could not ensure enough income for agricultural producers in Hungary. So the development of agricultural production cannot be realised additionally to the unfavourable background conditions for the sector. Comparing the support structure experienced in the OECD with that in Hungary, it can be declared, that within the PSE (Producer Support Estimate) during 1997–2000, the MPS (Market Price Support) declined, similarly it was in Hungary. In the OECD, the 8–9 percent share of payments based on input use has remained at same level within the PSE. The subsidy based on input use in Hungary was a main element within the overall subsidy system, and its proportion within the producer subsidy increased from 9 percent to 27 percent during the same period. The payment based on the regulation on input use (environment friendly production) also decreased and shared 2 percent within producer subsidies. In the OECD, payments based on farming income totalled only 1 percent of the total producer subsidies, as well as it was experienced in Hungary. Hungarian market price subsidies by products reveal that milk, eggs and poultry enjoyed a high Market Price Support. On the other hand, Market Price Support to beef cattle remained low. 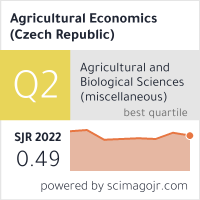