Muscat Blanc a Petits Grains grape (Vitis vinifera L.) is used for the production of Asti (or Asti Spumante) and Moscato d‘Asti wines from Piedmont (Italian DOCG designation, D.M. 29-11-1993). The sweet floral aroma from Muscat grapes is a required sensorial quality of these wines. The evolution of the volatile aroma in wine is correlated to many parameters (grape variety, winemaking practices, microbial starters and microflora development, ageing). The oxidation of some compounds was reported to be of fundamental importance in Muscat-type wines aroma (ARLORIO et al. 2005). The unexpected development of off-flavors is a common accident, also in white sparkling wines (LIZARRAGA et al. 2004). The aim of our work was to develop a high-sensitive multi-dimensional comprehensive capillary gas chromatographic method for the analysis of Muscat wines volatile compounds. Second aim was the application of this method to the study of the evolution of the volatile aroma (via Head-Space Solid Phase Micro Extraction, HS-SPME) during the ageing of Asti Spumante and Moscato d’Asti DOCG. wines. A divinylbenzene/carboxen/polydimethylsiloxane (DVB/CAR/PDMS) fibre was used in HS-SPME extraction from all wine samples. The volatile aroma was analysed using GC×GC coupled with a Time of Flight Mass Detector (TOF-MS) (RIBEREAU-GAYON et al. 1975). Qualitative complex – multidimensional profiles were obtained; terpenoids were easily identified in Muscat wines, employing both commercial standards and NIST mass spectral library. In one-year aged wine samples, linalool, nerol and geraniol decreased respect to the young Muscat wine to become less important regarding the aroma, as previously described by other authors. Therefore, α-terpineol, hotrienol, nerol oxide, furanic linalool oxides A/B and rose oxide concentration significantly increased, confirming an oxidative evolution of the aroma. We also identify some off-flavors, responsible of wine imperfections described as cork tones, plastic, mushroom. The presences of 2,4,6-trichloroanisole and 2,4,6-tribromoanisole have been highlighted in some samples. Many other “in trace” compounds (still unidentified) were present in all multidimensional chromatograms.) Finally, HS-SPME/GC×GC/TOF-MS chromatographic analysis of Muscat-based wine volatiles, proved to be a novel powerful technique for the description of qualitative-quantitative complex fingerprints during the aroma evolution, establishing bases for further investigation in the “volatile fraction” of aroma of these aromatic wines. 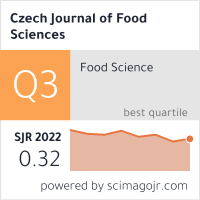