https://doi.org/10.17221/542/2015-PSECitation:Bernik R., Demsar I., Potrpin J. (2015): Growth requirements of different potato cultivars. Plant Soil Environ., 61: 553-559.
download PDF
A field trial with four potato cultivars (Faluka, Manitou, Madeleine and Stirling) was conducted in two consecutive years (2012 and 2013) at a laboratory field of Biotechnical Faculty in Ljubljana. The aim of the study was to evaluate different requirements of the selected cultivars in regard to the ridge and tuber cluster. The following parameters were defined and monitored: area of the form surrounding the tubers (ellipse), cross-sectional area of the ridge, vertical and horizontal tuber span in the ridge, the length of semi-axes (a) and (b) of the ellipse, minimum distance of tubers and ellipse from the outer ridge side. The results of 2012 trial indicated that the minimal ellipse method defining the ellipse was not satisfactory as statistical significance was limited due to a large volume of vacant space in the ridge not occupied by potato tubers. Therefore, the mathematical model was upgraded in 2013 and a physical parameter (tuber mass) was incorporated in the equation to better depict the tuber cluster. The trials were designed as a randomized block with five repetitions. The largest ellipse, horizontal tuber span in the ridge and the longest semi-axis (a) were recorded for the cv. Manitou resulting in the highest yield. However, no statistical differences were recorded in the horizontal tuber span, the length of the semi-axis (a) or cross-sectional area of the ridge among cultivars analysed. It was determined that different cultivars require specific growth space in the potato ridge. Moreover, the newly developed method proved efficient for determining growth requirements of potato tubers in the ridge.
Keywords: 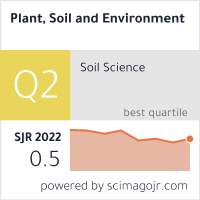