https://doi.org/10.17221/143/2014-SWRCitation:Podhrázská J., Kučera J., Karásek P., Konečná J. (2015): Land degradation by erosion and its economic consequences for the region of South Moravia (Czech Republic). Soil & Water Res., 10: 105-113.
download PDF
The quality of agricultural land fund in the Czech Republic is assessed via a valuation system based on the ecological-productive land evaluation. This system was established in the 1960–1980s after a complex survey of agricultural land. It provided integral information on the agricultural land quality and on the price of agricultural land parcels derived from their productive capacity. Starting from the 1990s, evidence in the database of Evaluated Soil-Ecological Units (ESEU) has been regularly updated. Intensive cultivation of wide-spaced crops, namely in extended, largely sloped land parcels, has resulted in degradation of land characteristics by the effects of erosion. The ESEU updating makes it possible to detect these changes and their quantification by differences in land price. This approach was applied to evaluate the economic impacts of erosion at two model localities in intensively exploited agricultural areas, in the region of the most productive soils of the Czech Republic. We compared the price per 1 m2 of land according to the land characteristics determined by the first land valuation with the current soil price based on the ESEU update. We also compared changes in the land characteristics. In the GIS environment, we established the mean long-term soil loss by erosion based on the original ESEU and compared it with the calculated soil loss based on the updated ESEU. The calculation method used was in accordance with the valid methodology for erosion calculation in the Czech Republic.
Keywords: 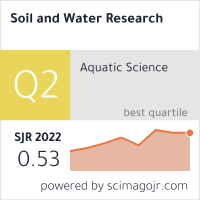